CA 77696 is a 1969 Triumph Spitfire MK111, British Racing Green in colour, which was assembled at the Rover plant in Durban.  Her first owner, or at least the last owner before I purchased her, was apparently a young lady who had a minor fender bender, which explains the faded paint of a different shade of BRG on the right-hand lower edge of the bootlid.

I purchased her in more or less mid-1971 through one of the more reputable Cape Town second-hand car dealers.  I had started a career in Nature Conservation in 1970 and by 1971 I could afford the Hire Purchase payment, courtesy of the erstwhile Trust Bank, on an annual salary of R3000!  The only thing I did to the car was remove the simulated alloy wheel covers and purchase Spitfire hub-caps, which I shortly thereafter replaced with Triumph 2000 hubcaps which still had “the Globe” badges on their centres!  My brother, who had sold his 1957 TR3 in I think 1965 (his wife says she almost lost their first baby due to the hard suspension) helped me collect the Spit and seemed somewhat sceptical, since in his eyes it wasn’t a proper sports-car as it had “a heater as well as wind-up windows”.  To his credit, he never made any reference to its lack of grunt compared with his TR3! Her first long trip was also in 1971, when my brother-in-law and I drove up to Johannesburg to watch a Cup final between Cape Town City and Highlands Park, two former great names in South African professional soccer.  Up in 12 hours, we managed to get back in another 12 hours.

For tasks I couldn’t undertake I used to get assistance from a friend of my Dad,well-respected Cape Town “motor engineer”, Mr Umberto Bronzato, an Alfa afficianado, who serviced the first Lamborghini in Cape Town, at the Lamborghini company’s request.  When Umberto retired, he told me not to worry as he could recommend some young Italian brothers with a workshop in Woodstock, which is how I met the Viglietti brothers! In 1972 the Cape Provincial Administration afforded me the opportunity to undertake a B.Sc. Honours course in Wildlife Management at the University of Pretoria.  Several trips to Pretoria were then undertaken since one of the conditions of the bursary was that I returned to the research office (of the Cape Department of Nature Conservation) at Jonkershoek during the university vacations.

On my initial trip to Pretoria, the clutch plate failed and I couldn’t get the car to start in second gear by swinging the starter.  It was about 09h00 when I managed to flag a car down and ask the driver to stop at Winburg, the nearest town, to send out someone to tow me into town.  After an hour or two the sole vehicle coming from Winburg was a Datsun 1200 bakkie.  I jumped up and down to no avail!  About a kilometre further down the road I saw the Datsun’s brake lights come on;  he turned around and approached me.  “Is jy die ou in die moeilikheid?”  When I answered in the affirmative, he sighed, let out an oath and said “Die ou oom het vir my gesê daar is ‘n snaakse Citroen op die pad met moeilikheid”! Courtesy of a Post Office savings-book and an extremely helpful garage-owner in Winburg and a motor spares dealer in Virginia, the Spitfire was on her way again en route to Pretoria at roughly 20h00.  I was in a hurry and near the barrage on the Vaal, I ran out of petrol.  Again good-natured fellow-motorists assisted, took me to the nearest garage and I got some petrol into her around midnight.  Would or could that happen to-day?!

I still had to get to Pretoria; write an examination at 08h00, and I didn’t even know where the university was.  I found an hotel at ±04h00; slept until 06h00, and then studied for an hour, phoned a friend and got to the university.  The exam was another story!  After writing, dog-tired I walked out to where I’d parked the car.  Gone!  Almost in tears one of my new fellow-students gently told me this was a tow-away zone and my car would probably be in the municipal pound!  The start of a good friendship saw me at the pound and after an appropriate monetary exchange (borrowed!), I became mobile again. Our course involved a lot of field-work.  Transvaal grasses in natural areas are often over 2 m (6 ft +) in height.  Fellow students had bakkies – try finding a Spitfire in 6 ft tall grassland!

It was about halfway through the year when I was driving up Andries Pretorius Street near the city centre, on my way to the campus (the streets were still two-way in those days), when a very pretty young lady, in the  shortest of minis, was wanting to cross the street.  My attention was suitably distracted for an instant, and on returning my eye to the windscreen I was horrified to see the brake-lights of the car in front of me suddenly come on and I slammed on my own anchors and came to a dead-stop.  Unfortunately the befinned yank tank in front of me had nose-dived, its tail rising into the air, only to come down shortly thereafter with its tow-bar landing on my car’s beautiful nose.  The panel-beaters never really did a good job and the evidence is still partially there! It was in Pretoria that I also learnt a bit more about the intricacies of badge-engineering.  There was a fellow Spitfire owner at the residential hotel where I boarded.  Someone bumped his one indicator unit in front.  The local BMC agent had no spares, so I told him to ask for one for an MGB.  That they had in stock, and at half the price, but with a different part number!  And the difference – relative to the Spitfire’s, the MGB one is mounted upside-down!

After completion of my degree I took a few weeks leave and treated myself to a holiday in the Eastern Cape/Transkei.  My technical assistant of the time begged to come along, much to the chagrin of my then girlfriend (later my first wife)!  After an exciting week observing the natural non-human wildlife of the Eastern Cape we made our way back.  Coming down the hill into Grahamstown I overtook a Triumph 2000 (or was it a Chicane in 1972?) with the needle reading just over 100 m.p.h., followed by an almighty bang!  A bearing cap had come loose and the crankshaft knocked the con-rod through the side of the block!  With a red face that lasted for days I arranged to have her railed back to Cape Town and hiked back myself.

Once back in Cape Town a family friend in the motor business arranged for the block to be stitched, and I had all the other repairs to the motor (not that there were many!) done thereafter.  She still has the same motor (although I do have a spare block and bits)! She also starred in both my marriages (one in 1974 and the second in 1990) and a few other weddings.  She took my eldest daughter and my son to their respective matric dances, with the latter driving her himself!  Sadly gearbox issues prevented it from transporting my younger daughter to her matric dance, although she did go in a lovely convertible, even if it had to be French!  Repairs by Frank Dreher got her back on the road for my son’s turn, but prior to that she also served many friends’ children as well.

For the first wedding, she also served as the honeymoon car.  On the way to Addo Elephant National Park, we crossed a causeway in a relatively fast-flowing stream.  Needless to say the exhaust extension I had rigged to ensure a safe passage, collapsed.  With water damming up on the drivers side, the new bride had to get out on the passenger side and fortunately found several little black faces who helped her push the car to the opposite bank.  Once there, a car travelling from the other direction informed us that Addo was back on the other side!  This time the little black faces and I pushed the car back!  Fortunately it started, and the next day I spent draining and replacing the oil!

As to her future, she is destined, God willing, to end up in the permanent care of my son.  Fortunately both he and his girlfriend enjoy taking her for the occasional spin to local destinations such as Franschhoek, etc.  Although I have told him she is now his, I added that for the nonce she stays with me, so Pam and I can also enjoy her on the occasional club run, just as I used to do when I was previously a club member in the 80s (or was it also the 70s?). Hopefully she will continue to provide the same fun for the next generation.  That generation has already started showing the interest, affection, and care that she she will need to enjoy her future life.  Thank you CA 77696.  P.S. I love you! 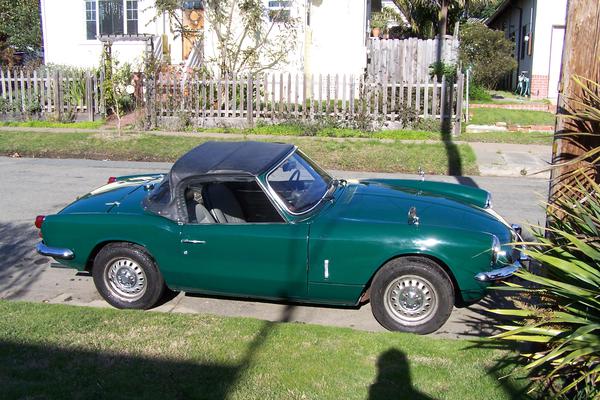